Early Painters of the Borrego Desert

This week, I've decide to highlight an article by Ann Japenga, who discovered a painting for $99 by desert artist Edith Purer. Our contributing writer and desert art expert is a former Los Angeles Times reporter whose work has appeared in many publications including Sierra, Utne, The New York Times.

Japenga says her introduction to desert art came when she bought her first smoketree painting at Carl Bray’s roadside gallery in Indian Wells some 15 years ago. Though she fretted over whether to drop $100 on the painting, she wound up with a far better deal than she could have guessed. The canvas was her doorway into the rich, bohemian world of the early desert artists.
She now writes the go-to online magazine on Desert Art: http://www.californiadesertart.com/

"Early Painters of the Borrego Desert" by Ann Japenga
(This article first appeared in The Sand Paper, the newsletter of the Anza-Borrego Desert Natural History Association.)

Around 1930 a young botanist from Chicago came to the Borrego desert to dig in the sand and collect native plants. At some point hunting for tansy-mustard and tidy-tips wasn’t enough for her, so she took out her easel and began painting the dunes and smoke trees.

Last month I picked up one of her 1930s Borrego paintings on eBay for $99. When I hung the painting on my bedroom wall, it immediately connected me to Edith Purer herself (she became California’s first woman ecologist), as well as to the plants, topography and mood of Anza-Borrego. I live in Palm Springs, but the last thing I see at night is the Borrego desert. (Painting of the Borrego desert, circa 1930s, by botanist and ecologist Edith Purer)

That’s the beauty of the early desert paintings: Their ability to connect you to landscape and history. Though desert paintings are soaring in popularity with collectors, you can still scour thrift shops and online sales and pick up lesser-known artists for less than $100.

The early California artists, also known as plein-air painters (plein air means “in the open”), are the original conservationists. The paintings of Albert Bierstadt and Thomas Moran, for instance, showed the world what was worth saving in Yosemite. In the Coachella Valley where I live, the early artists preserved in paint fields of verbena and cholla that are gone forever due to development.

In Borrego, you are lucky to have many of the original landscapes intact. In many cases, you can still locate the precise arroyo a painter captured, or stand in the exact spot the artist stood.

After landing an original Edith Purer, I started to wonder what other painters may have worked in Borrego. The only name I knew of was the irrepressible stagecoach painter Marjorie Reed, but there had to be more. After all, many now-famous painters captured the deserts just over the hill in the Coachella Valley—Jimmy Swinnerton, Paul Grimm, John Hilton.

North Shore art collector Allan Seymour told me the Palm Springs artists for the most part did not travel to Borrego. “The toe of the Santa Rosas made it a much longer journey for Palm Springs, LA or Laguna painters to journey all the way to Anza-Borrego,” he said. “This made the area a San Diego painters’ Mecca.”

Fortunately for Borrego history, San Diego was a hotbed of landscape painting in the early decades of the 20th century; and the most famous artists—Alfred Mitchell, Maurice Braun and Charles Fries—fell in love with the Borrego desert. At the time Edith Purer was scouting the dunes, Charles Fries was sketching at Coyote Wells while dodging falling boulders, coiled rattlesnakes and gem smugglers.

Alfred Mitchell brought carloads of his lady art students over from San Diego; some became avid Borrego painters themselves. William Bartko, who died in Borrego Springs, was out painting the favorite plant of the painters—smoketrees. While the coastal painters worshipped the eucalyptus, the desert painters could not get enough of the scrubby, shape-shifting smoketree.

Another San Diego painter who frequented Borrego, Charles Reiffel was compared to Cezanne and Van Gogh for the boldness of his imagination.

Maurice Braun, most revered of the San Diego artists, was heavily influenced by the School of Theosophy at Point Loma (known as Lomaland). With the mystical tenets of Theosophy guiding them, Braun, Alfred Mitchell and other Theosophists ventured over the hill to the desert. Amy Difley Brown, one of those who attended the Theosophy school, often camped in the desert with her granddaughter, Lynne Salmon, in a little teardrop trailer. Salmon, who lives in La Mesa, told me one of their most memorable campouts was going to visit Brown’s friend, Marjorie Reed, at Campbell Ranch.

What I’ve told you here is just an overview—and hopefully a temptation. There is plenty more to be discovered about the Borrego painters. A good place to start is The Journal of San Diego History (many editions are available online) and the website www.AskArt.com that compiles information about thousands of famous and obscure artists.

For more articles by Ann Japenga: see: http://www.californiadesertart.com/?page_id=7
Posted by Alissa Campbell at 10:58 AM 1 comment:

Many of California's great artists came through Santa Barbara at one point or another. As an art appraiser, I get to see many of theses paintings in local collections. Santa Barbara served as an artist colony of the Eucalyptus School and later appealed to many California modernists. Inspired by Santa Barbara's landscape, architecture, and history -- artists flocked to the small Central Coast community. One of the town's important artists, albeit lesser known, was Channing Peake who was a muralist, painter, and draftsman.

Channing Peake (1910 – 1989) was born in Marshall, Colorado but as a young boy he and his family moved to northern California. After completing high school, Peake began attending art school at the California College of Arts and Crafts in Oakland. For two years he studied at the Santa Barbara School of Art and then traveled to New York at the Art Students League under Rico Lebrun, a colleague he would come to work with for many years. He also befriended the great Diego Rivera and traveled to Mexico, Guatemala, and Europe with the famous muralist. Under the WPA Federal Art Project, he became a muralist and in 1928 helped paint murals in Santa Barbara's El Paseo Restaurant, along with fellow artists Edward Borein, Joe DeYoung, and Will James.

Peake ultimately settled in Santa Barbara where he became a founding member of the Santa Barbara Museum of Art. He collaborated with artist, Howard Warshaw on the Don Quixote mural at Santa Barbara City Library. In 1984 Peake completed a mural which is planned to be on display in 2011 at the Santa Barbara Airport's new terminal.

For further reading, check out a recent article in Santa Barbara Magazine.
Posted by Alissa Campbell at 2:32 PM 2 comments: 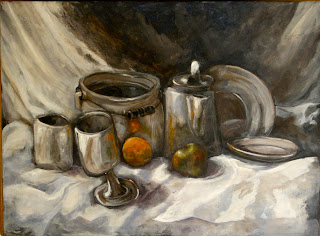 Doing art appraisals in California, I have a particular interest in local artists and how their art markets.  So when Carpinteria locals, Debra and Paul Aresco, submitted this painting by California landscape painter John Wullbrandt, I was eager to discover its worth.

The question is: Does this painting have any value in today's art market? I always tell my appraisal clients to remember that value is based on many factors. While family history or nostalgia seems to count for a lot, it’s not what substantiates value. An official art appraisal is based on market comparables and takes into account the artist, as well as condition, size, authenticity, provenance, and the current economy. An appraiser also has to consider the popularity of an artist’s style -- and whether the artwork is being sold at a gallery or auction.

All of us hope to stumble upon a masterpiece in our local thrift store. When our collector walked into the Catholic Thrift Store a few years ago she immediately recognized this painting by John Wullbrandt. She didn’t know if it was valuable, but remembered him painting it while they were in school together at Carpinteria High School in the 1970s. So she decided to buy it -- for $3!

What I discovered is that John Wullbrandt is a contemporary artist born in Santa Barbara, California. He is a self-taught painter known for his realistic landscapes and trompe l’oeil paintings. Wullbrandt spent many years establishing a career in Hawaii and returned to Santa Barbara to paint from his art studio on a local ranch. This painting, “Still Life with Pears” is an early work by Wullbrandt and has a likeness to Cezanne’s work. Utilizing cubist forms, muted colors, and flattened perspective -- Wullbrandt was experimenting with modernist techniques.

While Wullbrandt has no auction records, a number of galleries in California and Hawaii sell his work. “Still Life with Pears” is a large painting, which is in good condition. An early work of this quality would be highly sought after by collectors. While this $3 thrift store find may be a Wullbrandt rather than a Rembrandt, it’s a treasure indeed! In a gallery, this painting would be estimated to sell between $10,000-$12,000.
----------
Alissa J. Anderson is an art appraiser for Anderson Shea Art Appraisals in Santa Barbara, CA. She specializes in appraisals for insurance purposes, resale value, estate tax, and charitable donation. She is a member of the Appraisers Association of America (USPAP-compliant), qualified to appraise American and European paintings, drawings, and sculpture. Anderson also works as an art writer and independent curator. (www.andersonshea-artappraisals.com)

©2010 Alissa J. Anderson, Santa Barbara, California. All Rights Reserved. None of the contents of this article may be reproduced, stored in a retrieval system, or transmitted in any form or by any means (electronic, mechanic, photocopy, recording, or otherwise) without the prior written permission of Anderson Shea Art Appraisals, and the appraiser’s signature.)
Posted by Alissa Campbell at 10:42 AM 1 comment: