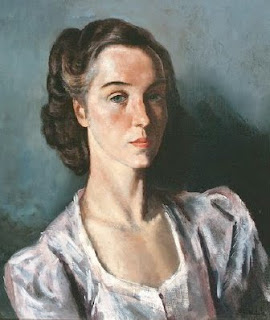 Portrait and figurative painting continues to exist as an unparalleled genre of painting which serves as a compelling and accomplished articulation of the human experience. A portrait reveals a time, a place, and an individual. A successful portrait by a skilled artist reveals a uniquely intimate moment between an artist and sitter – one that is pure, unguarded, and candid.
(©2009 Alissa J. Anderson. All Rights Reserved. None of the contents of this article may be reproduced, stored in a retrieval system, or transmitted in any form or by any means (electronic, mechanic, photocopy, recording, or otherwise) without the prior written permission of Anderson Shea Art Appraisals, and the appraiser’s signature.)
Posted by Alissa Campbell at 4:08 PM No comments:

ART FIND of the MONTH 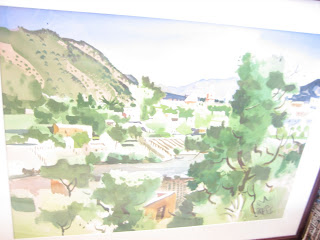 (Once a month Alissa Anderson does an online art appraisal for one of our readers. Submit your art.)

Is the painting you unearthed during spring-cleaning, the next Jackson Pollock? If you’ve seen Antiques Roadshow on PBS, you know digging around in your garage might just be the next great treasure hunt.

What makes art valuable? The answer is this: it depends. Value depends upon many things including the artist, the condition of the object, art market trends, and whether the artwork is sold at a gallery or auction. An art appraiser also has to consider authenticity, provenance, and style.

So when we asked our readers to submit a piece of art for an online appraisal, we discovered something exciting. Our Santa Barbara art collector inherited a painting from her mother, who spent many years in Claremont, California. She didn’t know much more that that. As an art appraiser, my first big clue was a signature and a date identifying it as painting by one of California’s watercolorists, Milford Zornes. Zornes began painting during the Great Depression, alongside Southern California artists Millard Sheets, Rex Brandt, George Post, among others. During the 1930s, the group formed the California Style of watercolor painting as an inexpensive alternative to oils. Watercolors and paper also enabled impoverished artists to transport their materials easily and paint on site.

As an art appraiser specializing in California art, I was able to discover that “Farm House” was painted in 1953 and depicts a scene from then-rural Riverside with the snow-capped San Bernardino Mountains in the background. Demonstrating Zornes’s unique variation on the Watercolor Style, he utilizes large, swift brushstrokes and stark, unpainted negative space. Zornes lived to be 100 years old and painted almost all his life. He is widely regarded in the art world and his paintings are widely collected, making “Farm House” a desirable artwork.

At auction this painting would be estimated to sell between $3,000-$5,000. A treasure indeed. . .
Please submit your painting, drawing, or sculpture for next month’s ART FIND. To be considered, mail a photo and brief description to: artsappraiser@gmail.com

©2009 Alissa J. Anderson, Santa Barbara, California. All Rights Reserved. None of the contents of this article may be reproduced, stored in a retrieval system, or transmitted in any form or by any means (electronic, mechanic, photocopy, recording, or otherwise) without the prior written permission of Anderson Shea Art Appraisals, and the appraiser’s signature.)
Posted by Alissa Campbell at 2:30 PM 1 comment:

How to Find an Art Appraiser 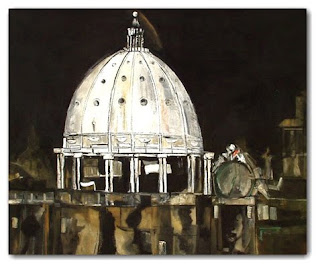 People often ask me: "How do I find a qualified art appraiser?"

When it comes to finding a qualified art appraiser, there are few VERY important things to keep in mind. Like in any field, do your research.

From a qualified art appraiser based in Santa Barbara, California here are some useful tips:

1. First and foremost, an art appraiser should be a member of one of the 3 appraisal associations (AAA, ISA, ASA). These associations regulate their appraisers by enforcing ethics and principles of appraising. Associations also require their art appraisers to be tested under The Uniform Standards of Professional Appraisal Practice.

2. Make sure your art appraiser has taken (USPAP), a test required for appraisers in all disciplines and ensures that appraisers are aware of generally accepted standards for professional appraisal practice in North America. USPAP is regulated by Congress under The Appraisal Foundation.

3. An art appraiser worth hiring also has a formal arts education and has expertise in the art market. He/she is highly trained and should have a degree in art history, appraisal studies, connoisseurship, theory, ethics, and procedures of art appraising.

4. Art appraisers should have a specialty in your type of personal property (fine art, prints, 19th century American paintings, California art, etc.) and years of experience. Obtaining a copy of the prospective appraiser's resume and references is strongly suggested. They often list these on their websites.

5. Qualified art appraisers are professionals. They are essential to protecting art collectors, museums, artists, and investors. Appraisals are used by insurance companies, bankers, lawyers, and accountants to protect assets. So get your art appraised, and make sure it's by a professional.