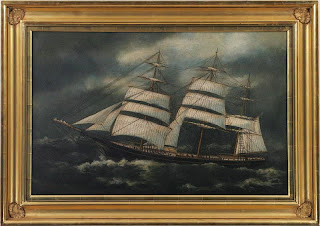 This month's ART FIND submission is an interesting work by the East Coast painter William Stubbs. As an art appraiser in California I often deal with Western art, but I have a keen interest in American art done on the other side of the country.
After watching too many episodes of Antiques Roadshow, all of us hopes to find a treasure at a weekend estate sale. This time, our reader seems to have done so! Back in 2008 our reader and avid treasure-hunter headed out to an estate sale on the north shore of Long Island.  Here, he found this painting by the famous marine painter William Stubbs.
Painted in 1880 this painting, "Three Masted Ship in Storm" appears to be a quintessential ship portrait done by Stubbs.  William Pierce Stubbs (1842–1909) was born in Orrington, Maine. As the son of a shipmaster, Stubbs learned the architecture of a ship by working on it. It is thought that he became the master of his father's ship between 1863-73. In 1871 he painted  his first ship portrait and by 1876 he was known as a Boston area marine painter. Stubbs shared a studio with the artist Wesley Webber and continued painting well-known ships in the area.
William Pierce Stubbs exhibited on of his early paintings in Boston's International Marine Exhibition of 1889, where he gained acclaim as a young American artist. Stubbs produced a small body of work and is acknowledged by the American art market as a professional and listed artist. Stubbs worked throughout the Eastern seaboard, creating a number of ship paintings. His paintings are held in the collections at the Mariner's Museum, the Mystic Seaport Museum, the Beverly Historical Society, the Philadelphia Marine Museum, and the Smithsonian Institution.
William Pierce Stubbs has a highly recognizable style. Most of his works depict the profile of a ship with a focus on detail. He often includes the name of this ship within the painting. Known for his dramatic depictions of ominous weather and rough waves encompassing the ship, Stubbs almost always signed his paintings in red. Many of his paintings document important historical ships of the period.
William Pierce Stubbs current values are based on auction records and gallery pricing. Estimating an artwork's value takes into account the condition, size, authenticity, provenance, and the current economy. When estimating a value, an appraiser also has to consider the popularity of an artist’s style -- and whether the artwork is being sold at a gallery or auction.
Many galleries and auction houses on the East coast sell William Pierce Stubb's work. "Three Masted Ship in Storm" is a large painting and if it is in good condition, an early work of this quality could be highly sought after by collectors. Values for Stubbs work have a wide range of pricing which, like every art appraisal, are based on age, condition, rarity, artistic merit, technical workmanship, current trends and availability of an article.  The highest values are paid for famous, named ships. In an auction, this painting would likely be estimated between $5,000-$7,000, and perhaps more if the ship's name could be identified. A treasure indeed!
----------

Alissa J. Anderson is an art appraiser for Anderson Shea Art Appraisals in Santa Barbara, California. She specializes in appraisals for insurance purposes, resale value, estate tax, and charitable donation. She is a member of the Appraisers Association of America (USPAP-compliant), qualified to appraise American paintings, drawings, and sculpture. Anderson also works as an art writer and curator. (www.andersonshea-artappraisals.com)


©2011 Alissa Anderson, Santa Barbara, California. All Rights Reserved. This is not an appraisal. Authenticity is not guaranteed. This article is for educational purposes only. None of the contents of this article may be reproduced, stored in a retrieval system, or transmitted in any form or by any means (electronic, mechanic, photocopy, recording, or otherwise) without the prior written permission of Anderson Shea Art Appraisals, and the appraiser’s signature. )
Posted by Alissa Campbell at 12:37 PM No comments: