I recently did an art appraisal for a Santa Barbara collector of a painting by Dixie Selden. Dixie Selden was born in Cincinnati, Ohio and is best known for her impressionist portraits, still-lifes, and landscapes. She studied art at the Cincinnati Museum Art School under the esteemed artist Frank Duveneck.

Like many artists of her time, she did the grand tour, seeing art in Selden traveled to Spain, Italy and  France and the rest of Europe. She also gained further artistic training with William Merritt Chase.

Selden also traveled in the U.S., painting the New England coastline during the summers, often with Emma Mendenhall as a painting companion. Selden was President of the Cincinnati Women's Art Club, and was active in the National Association of Women Painters and Sculptors. She exhibited with those groups as well as at the Pennsylvania Academy, the Corcoran Gallery, and the Art Institute of Chicago.

Selden is considered a listed artist with strong gallery listings and auction records, indicating her work is widely traded on the market. Past auction records indicate auction sales up to $62,100 although most artworks sell for less.
Posted by Alissa Campbell at 5:24 PM No comments:

One of my favorite California artists in the genre of mid-century modernism is Helen Lundeberg. I always love seeing new paintings by her. Lundeberg painted surrealist subjects as well as hard-edged geometric compositions. Her depictions of macrocosms and microcosms are some of her most interesting works. 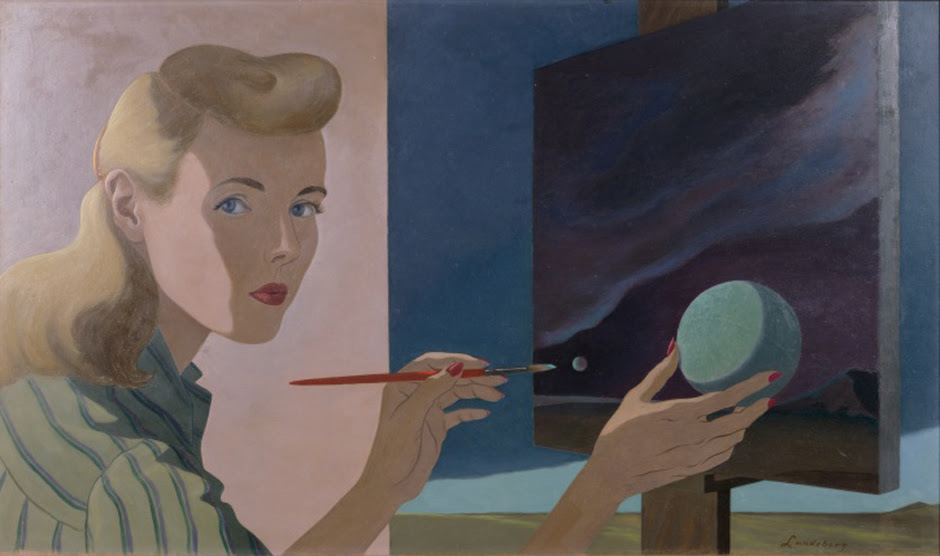 Helen Lundeberg (1908-1999) was born in Chicago, Illinois 1908. As a child she moved to the artist colony of Pasadena, California. In 1930 she enrolled at the Stickney School of Art in Pasadena where she was met Lorser Feitelson, her future husband.

From 1933-42 Helen Lundeberg worked as a muralist and lithographer for the WPA California Federal Art Project, including a 240-foot-curved wall in Centinela Park in Inglewood, CA. Simultaneously, she and Feitelson founded an art movement known as Post-Surrealism.

Early in her career Lundeberg's work was exhibited at the Brooklyn Museum and New York’s Museum of Modern Art. Later in her life she had work shown in the San Francisco Museum of Art. She was working during the same time period of Georgia O’Keeffe and some similarities can be found between the two artist's interest in the abstract quality of extreme close-ups. Still, Lundeberg often depicted the cosmos and planetary structures.

Helen Lundeberg is one of the rare women artists whose work has a strong market value comparative to her male contemporaries. A recent auction at Bonhams and Butterfields sold three of her works in their Made in California sale.
Posted by Alissa Campbell at 1:13 PM No comments: