Some of the most interesting artists I come upon as an appraiser are a group of modernist artists who also happened to be women. Less recognized and undervalued on the art market include artists Helen Lundeberg, Lucretia Van Horn, Elsie Palmer Payne, Marion Randall Parsons, Florence Lundborg, Helen Forbes, and others. These artists attended many of the same southern California art schools as their male counterparts -- and explored equally compelling aesthetic innovations and modernist thought.

Jae Carmichael (1925-2005) was born in Los Angeles, CA and worked as a painter, sculptor, and photographer. Carmichael studied at Mills College and earned a BFA and PhD from the University of Southern California. She studied art with artists Francis de Erdely, Millard, Sheets, Phil Dike, Dong Kingman, and William Gaw. One of the rare women in the field, Carmichael organized over 200 solo exhibitions in galleries in Los Angeles, Japan, and Europe. Carmichael also served as founding director of Pasadena’s Pacific Asia Museum.

She was also a member of the American Watercolor Society and the California Watercolor Society -- and was a director of the Pasadena Society of Artists. Her work is known for its flattened, cubist style and unique subdued palette of color. Her paintings are included in permanent collections of the Oakland Museum of California, the Long Beach Museum of Art, and the San Francisco Museum of Modern Art, among others. 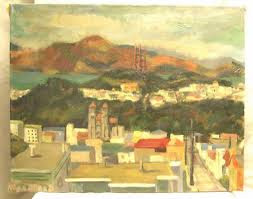 -------
I recently appraised a painting by the artist Mabel Alvarez (1891 - 1985) who was was born in Waialua, Oahu in Hawaii. Alvarez’s father was of Spanish decent and as the son of the business manager to the Spanish king, was given the opportunity to move to Hawaii to work as a physician to Chinese and Japanese immigrants. He was later the personal physician to Queen Liluokalani.

Mabel Alvarez moved to California with her family as a young woman. In 1915, Alvarez attended a prominent art school in Los Angeles directed by William Cahill. As a student, she painted a mural for the Pan-California Exposition in San Diego, which gained her acclaim in the art community.

In 1918, she began experimenting with symbolism, a surrealist style influenced by Will Levington Comfort, a Los Angeles philosopher of the period. In 1931, she became acquainted with Stanton MacDonald-Wright and Morgan Russell, founders of the Synchromy art movement. As a pupil of Matisse and Cezanne, the Synchromists were interested in explorations of color and rhythm. Alvarez became profoundly interested in the movement and produced some of her most important early paintings.

In 1937, Alvarez returned to Hawaii for a year and painted portraits, figure studies, and still lifes. During trip to the Caribbean islands in the 1950s led to a lightening of her palette and her use many oranges, reds, and bright pinks in tropical scenes. Later travels to Mexico reinforced these tendencies. As she got older, she often painted religious and symbolic subjects. 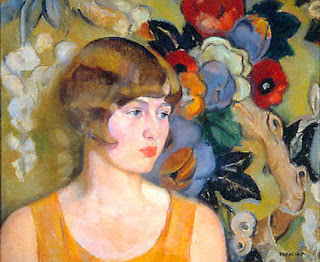 ----
Another of my favorite women artists is Ely De Vescovi (1910 - 1998), an artist who has fallen to relative obscurity after having innovated a great modernist technique. A pupil of muralist Diego Rivera in Mexico City, she she assisted Rivera in completing public murals commissioned by the Mexican government. Her first work with Rivera was repainting his infamous Rockefeller Center mural, "Man at the Crossroads," which was destroyed in New York.
De Vescovi assisted Rivera in his revolutionary discoveries of modern fresco techniques by creating a way to retouch a fresco after it had dried. Her formula used equal parts butanol and water that could be applied with an airbrush every four hours to keep the plaster moist. De Vescovi also found a way to grind cadmium pigments into a fine texture to be used in frescoes.
De Vescovi was commended by the art community for such innovations. She became a family friend of Rivera and Frida Kahlo. In 1935 De Vescovi displayed her oil paintings and watercolors including landscapes, figures, and still lifes.

In 1938, she travelled to the United States and during the 1940s she painted murals throughout southern California including the Los Angeles's Sawtelle Psychiatric Hospital. Her landscapes and portraits often depicted religious iconography and theology. De Vescovi was a close friend of muralist Jose Orozco, who also worked in California. She never returned to her native Mexico. Unfortunately very few of her paintings can be located.