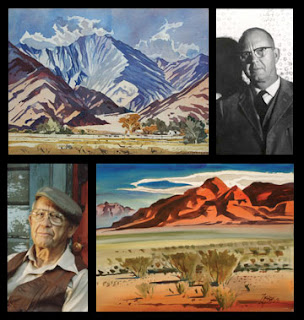 As the Guest Curator of the Wildling Art Museum’s current exhibition, "Milford Zornes: An American Artist,” I was excited to take a break from my usual stint as an art appraiser and delve into the remarkable career of one of California’s most notable artists, Milford Zornes.With the assistance of scholar Gordon McClelland, the exhibition consists of Zornes’ paintings borrowed from private collections throughout the country.

An innovator of the California Style of watercolor painting, Milford Zornes gained international acclaim for his expansive brushstrokes, vividly colored and abstract representations of the American landscape. In appraising art throughout California, I often come upon Zornes work. He was a  prolific artist, having lived to age of 100 and working for nearly 80 years. He was known to paint an entire painting in a few hours.

James Milford Zornes (1908-2008) was born in Camargo, Oklahoma. With the onset of the Great Depression, the Zornes family moved to Southern California, where Milford would ultimately settle as an artist and teacher. At a young age, Zornes pursued a career in journalism and moved to Santa Barbara County where he enrolled in Allan Hancock College (known as Santa Maria Junior College). Upon moving back to the Los Angeles area, he abandoned writing and pursued an art career.

While attending Scripps College in Claremont, Zornes became a pupil of Millard Sheets. Working alongside Sheets as well as Rex Brandt, George Post, Phil Dyke, other of California artists of the time -- Zornes began depicting regional Los Angeles. No longer able to afford the expense of oil paints during the Depression, the versatility and cost of watercolors enabled Zornes and his fellow artists to transport their materials to paint outside. “Arguably, watercolor was the most important medium sustained by American painters struggling with the new demands and untried possibilities of Modernism in the first half of the 20th century,” said Christopher Knight of the Los Angeles Times. The quick drying qualities of the medium required artists to use expedient, expressionist brushstrokes.

Zornes excelled in the medium and was soon commissioned to paint for the WPA's Federal Arts Project, and began to gain artistic prominence. Just as the Regionalist and American Scene styles of painting championed scenes of the everyday people, Zornes’ early works depicted cityscapes and life in Depression-era America. With the U.S. joining WWII, Zornes enrolled in the U.S. Army as a War Artist and traveled to China, Burma, and India -- where he began depicting exotic landscapes.

Upon returning to Claremont, California after the war, Zornes began teaching art. In his continued efforts to master watercolor, Zornes experimented with a looser, abstract style. With the movement of Post-War modern art gaining momentum, Zornes explored line, form, and color rather than purely representation scenes. “I think in terms of big abstract concern and I think of detail as an embellishment. I keep constantly in mind that while embellishment is important, still when you begin this process of embellishment, you can also begin the process of deterioration” said Zornes in "Milford Zornes: An American Artist" by McClelland.

Still, he never gave up representational painting. Instead of attempting to capture purely realistic landscapes, Zornes attempted to highlight the striking colors and shapes of an alternative American scene. In paintings such as “Zion in the Summer,” Zornes subtlety hints at form in order to capture the essence of a scene. With a few simple strokes, Zornes imbues a simple seascape with nuance, atmosphere, and vibrance.

Zornes worked for nearly 100 years documenting the beauty and evolution of California’s landscape as well as that of South America, Hawaii, Mexico, Alaska, and Europe. Zornes was also an influential teacher, helping instruct young artists at schools such as UCSB, Pomona College, Otis Art Institute, and Riverside Art Center.

Zornes’ work captures the surreal beauty of the American landscape. Still, his paintings are very much about the process of painting. The current exhibition at the Wildling Art Museum attempts to chronicle Zornes' achievement as an artist, exhibiting nearly 30 artworks done between the years of 1955-1985. The artist, not only, developed alternative methods of interpreting the natural world, but captured the American landscape with a distinctive voice and poignancy unique to few artists.

©2010 Alissa J. Anderson. All Rights Reserved. None of the contents or images in this article may be reproduced, stored in a retrieval system, or transmitted in any form or by any means (electronic, mechanic, photocopy, recording, or otherwise) without the prior written permission of Anderson Shea Art Appraisals, and the appraiser’s signature.) IMAGE: Courtesy of Wildling Art Museum
Posted by Alissa Campbell at 4:27 PM No comments: