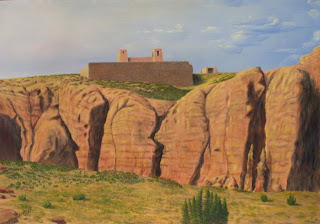 For this month’s Art Find, a reader submitted a painting by Western painter J.W. Benson. This large painting (5 x 7 feet) was given to the reader’s grandparents by a family dentist from Albuquerque in the 1950's. According to the story, there were times when the dentist would accept paintings in exchange for dental work, which is likely how this painting came into their family.

As an art appraiser, I often see Western paintings of the desert. There is something about the desert that has long-inspired artists – and artists like the American painter Georgia O’Keeffe’s most important work came only after she abandoned New York City for New Mexico –never to return from the desert.

J.W. Benson is certainly one of those painters who found inspiration in painting the vast, arid, and mysterious desert. For an artist like Benson, the abundant beauty and color that existed in the desert served as his greatest muse.

Jacob William Benson (1895-1958) was born in Thurmond, Iowa. As a young man, Benson moved West and began painting cowboy scenes in an around Wyoming. A painter and a muralist, Benson was commissioned by local ranchers to paint scenes of their homes and ranch buildings. He also produced sketches for postcards. Benson also traveled throughout the West, painting scenes of New Mexico, Arizon, and Utah.

This painting of New Mexico’s San Esteban Del Rey Mission at the Acoma Pueblo outside of Albuquerque, likely came from these travels. The Mission completed during the 1600's, but the Pueblo itself was established during the 12th-century. Interestingly, our reader’s ancestors originally emigrated from Spain and settled in New Mexico.

With bold colors and loose, sweeping brushstrokes – Benson depicts the Mission dwarfed by the large, undulating desert cliffs in the foreground. Like the 19th-century Romantic painters Benson’s appears to be interested in the humbling power of nature over man. He depicts and earth-toned Mission contrasted by magnificent monumental desert bluffs and sky.

In my appraisal research, I found that few auction records and galleries could be located for Benson’s paintings. Some of his postcard images have sold for minimal values. Unfortunately, without strong market comparables it is difficult to establish an appraisal of value on artworks. While the technique and quality of Benson’s "San Esteban Del Rey Mission” is highly accomplished, the lack of auction records would make auction houses hesitant to place a high estimate on selling price. The Auction Replacement Value* of this painting would likely be estimated between $800-$1,000 based on it’s large size, quality, subject, and condition. If this type of painting were by an artist with stronger auction records and/or galleries, it would be expected to sell for much more.

* Auction Replacement Value is defined as “a reasonable amount in terms of US dollars which would be required to replace a property with another of similar age, quality, origin, appearance, provenance and condition within a reasonable length of time in an appropriate and relevant auction market.” (Appraisers Association of America)

-------
Alissa Anderson Campbell is an art appraiser for Anderson Shea Art Appraisals. She specializes in appraising European and American art for insurance, resale value, estate, tax, and charitable donation. Campbell is a member of the Appraisers Association of America (USPAP-compliant). Ph. 805.616.2781/www.andersonshea-artappraisals.com
Posted by Alissa Campbell at 2:46 PM 1 comment: