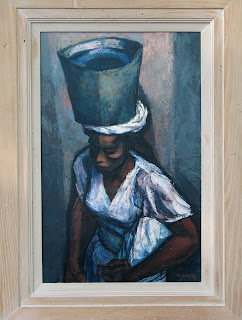 When I asked readers to submit artworks for this month’s ART FIND Art Appraisal of the Month, I got a piece by one of my favorites. As a American art appraiser, people often ask me who my favorite artist is. . . and this month’s entry happens to be my California artist of choice.

I have a long list of favorites, but Los Angeles mid-century artist Francis De Erdely is always at the my top of my list. In fact, I wrote my M.A. thesis on his social realist figurative work done in Los Angeles during the 1940s and 1950s.

Our Utah reader inherited this De Erdely painting entitled, “Lavandera” from her grandmother. She also discovered a Christmas card from the artist himself, indicating her grandmother bought the painting directly from Francis De Erdely in 1957. What this means, is that aside from her family, the public has ever seen this remarkable example of De Erdely’s work!

Francis De Erdely (1904 - 1959) was born in Hungary as Ferenc Erdelyi. De The artist fled Europe during the 1930s, as Fascism was gaining power. After a brief stint in New York City and Chicago, De Erdely finally made his way to Southern California. Here, he became one of mid-century California’s most influential modern painters and teachers.

De Erdely was a classically trained artist committed to painting the figure. Having traveled throughout Spain, De Erdely became influenced by the sinuous, elongated bodies of El Greco. De Erdely almost always painted the figure, a genre not often associated with modernism. Interestingly, his portraits were painted not out of nostalgia for the past, but as a reflection of the human condition on the West Coast.

With a likeness to Thomas Hart Benton’s powerful everyday Americans, De Erdely created some of the most striking figurative paintings in American art -- and his work remains poignant today. De Erdely has been included in more than twenty books about Los Angeles painters of the mid-century but there is no major monograph of his work.

De Erdely was known for his paintings of the modern figure as a way of addressing issues of race, immigration, labor, and social inequality in Los Angeles. The painting “Lavandera” demonstrates De Erdely’s ability to depict the simple yet graceful power of an everyday laundry lady. The cubist qualities represent De Erdely’s interest in a modernist aesthetic. The artist paints the woman’s face with severe angles that seem to mirror that of her laundry bucket. With a quiet power, the painting represents the complexity of one woman’s struggles and positions her as symbol as every woman.

From the photograph provided, the painting appears to be in good condition. A growing demand exists for Francis De Erdely’s work. The painting's style, technique, and brushwork are representative of his Los Angeles period, making it desirable to California modernist art collectors. The painting is well-executed and has a strong subject and composition, placing my art appraisal in the middle of the art market for De Erdely.

©2010 Alissa J. Anderson, Santa Barbara, California. All Rights Reserved. None of the contents of this article may be reproduced, stored in a retrieval system, or transmitted in any form or by any means (electronic, mechanic, photocopy, recording, or otherwise) without the prior written permission of Anderson Shea Art Appraisals, and the appraiser’s signature.)
Posted by Alissa Campbell at 11:32 AM 1 comment: